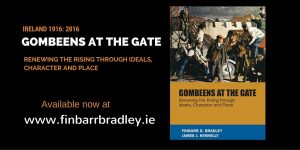 Last week was a busy one. My co-author and friend Jim Kennelly and I launched our latest book Gombeens at the Gate: Renewing the Rising through Ideals, Character and Place.

This is the third book Jim and I have written together. With only 100 pages (one for each year since the Easter Rising), we did remark that, unlike ourselves, our books are getting slimmer as time goes on!

Gombeens at the Gate delves into the Rising and the Irish Revival that preceded and inspired it. Ireland today, although quick to pay lip service to 1916, is sadly lacking in idealism and character. We are stumbling along with no overarching vision or purpose. We have an eroding national identity, lack of will to save our unique language, and as so many scandals and tribunals suggest, questionable reserves of moral courage.

Ours is a country where money and market values take precedence, where multinational companies possess outsized influence over economic policy and where there is far more concern for the economy than for society.

Why did this happen? How can it be changed? Gombeens at the Gate attempts to answer these questions.

Our opening chapter Easter 1916: Ideals and Freedom, argues that the Rising was about far more than political freedom. It was fundamentally about the most basic freedom of all: the freedom to be human. We illustrate that the leaders were not only idealists, but also men and women of character, willing to act upon their principles. 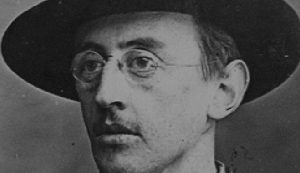 Take Joseph Mary Plunkett. A very sick man, he marched from Liberty Hall with a contingent of Irish Volunteers and Irish Citizen Army to take over the GPO. Frail and ailing during the worst stages of the shelling, nobody was better at rallying and raising the spirits of the troops. He spent the night of his surrender out in the open on the grass forecourt of the Rotunda Hospital. The following morning he was marched with six hundred prisoners to Richmond Barracks where he collapsed from exhaustion and had to be carried into the Barracks. Engaged to be married, his wedding to Grace Gifford took place in Kilmainham Gaol the day before his execution. The newlyweds had just ten minutes more together on the morning of his execution.

Ireland today is not the country the leaders of the Rising envisioned. We try to understand and appreciate their vision and highlight the ways in which the State has departed from that vision.

The following chapter, The Irish Revival (1890-1922) Character and Self-Reliance, describes how the Rising was inspired by the creative energy, blossoming identity, and burgeoning self-reliance that underpinned the Celtic Revival. Organisations like the Gaelic League, the Abbey Theatre, the Co-operative Movement, the GAA all shared a common goal – to transform Irish life. Together, they enacted a vision of a sovereign and self-confident country, economically competitive and culturally distinctive.

Our front cover illustration, a painting called Night’s Candles are Burnt Out, is by the Limerick artist Seán Keating (1889-1977). It depicts the building of the Shannon Hydro-Electric Scheme at Ardnacrusha, Co. Clare, which in 1925 kick-started the electrification of the country and the setting up of the ESB. Probably the most important social-economic project undertaken by the fledging State, it was at the time one of the largest civil engineering projects of its type in the world.

After independence, the visionaries who spearheaded the Revival, believed its ideals would be implemented. Our next chapter, 1922-1966: Vision without Capability illustrates how apart from exceptions like Ardnacrusha, they were sorely disappointed as successive governments repeatedly departed from the core vision. Revival thinking played little role in government policy. Ireland’s cultural past, which through the Revival had helped forged a new national spirit, substantiating claims of nationhood, was rapidly jettisoned.

In our chapter 1966-2016: Capability without Vision, we reflect on the past five decades, including the Celtic Tiger boom, the subsequent bust and our current recovery. 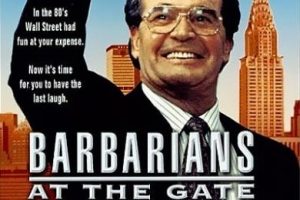 The inspiration for our book title is the 1989 best-seller Barbarians at the Gate. This is a tale of financial and corporate greed. Written by investigative journalists Bryan Burrough and John Helyar in the ‘80s, it describes the bidding war over the massive leveraged buyout of the conglomerate RJR Nabisco. It is the quintessential story of the ‘gombeen man’ in modern disguise.

The gombeen (derived from the Irish word gaimbín) is a despised figure in Irish history. Originally used to describe shopkeepers who exploited their rural customers through extending credit at exorbitant rates, over time it came to describe the activities of anyone who pursues financial gain by dubious means.  Our title is both provocative and pejorative reflecting as it does the incongruities of Ireland since the Rising. 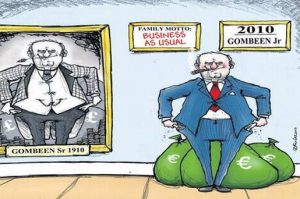 Ireland’s economy today is a manifestation of its ability to identify and exploit key competitive advantages such as an educated young population and low corporate taxes to attract global investment. This phase is accelerating towards a close. The rest of the world is not standing still. Our so-called distinctive advantages are not so unique anymore. Even Ireland’s powerful calling card, its 12.5 per cent corporate tax rate, is under significant threat by EU authorities and has precipitated a backlash in the US.

Though the title doesn’t hold back, our book’s purpose is actually to inspire. Our final chapter is about Shifting Paradigms: A Better Way Forward.  We argue that Ireland must transition. We must now compete on distinctive but valuable characteristics that are difficult or impossible for others to duplicate.

The bedrock for Ireland’s society has to be founded on a renewed pride in place, cultural traditions, language and an emphasis on sustainability and biodiversity. This will require a paradigm shift on the part of policy makers, business leaders and educators.

Rising and Revival – what is the Real Legacy?

For all of their faults, the visionaries who were captivated by the heady spirit of the Revival and the equally determined revolutionaries who went out to fight for freedom in 1916, all shared a vision of Ireland as not only a sovereign state, but as the home of a good and successful society. A society where people of all traditions and persuasions could flourish.

The true legacy of the Rising must be characterised by authenticity, tradition, integrity and a distinctive sense of place.

Now is the time to rejuvenate a true enterprise spirit; to generate the innovative and equitable society that was fought for, but never achieved, a century ago.

It will be another week or two before Gombeens at the Gate makes it into your local bookstore. However, the book is already available for online purchase on my website: www.finbarrbradley.ie.

I encourage you to read our book, explore with us these ideas and ultimately make up your own mind. I’m keen to hear what you think.